The 808 is a drum machine manufactured by Roland in the ‘80s. It had the particular feature of using all synthetic sounds that sound fairly authentic.

Nowadays, the term 808 has become widely used to indicate the bass sound in that drum machine.

The 808 sound is a long decaying bass sound that generally plays along with the kick drum as an extension of it.

It covers both a rhythmic and a melodic role, making it a very engaging sound, capable of shaking the dancefloor.

Since the ‘90s, the 808 paved his way to mainstream music like very few other sounds did.

In the ‘90s, it was relegated to occasional experimental stuff. In the 2000s, it was a preeminent element of Trap music, which at the time was still considered as underground.

Even if not strictly Trap, the very first notable album that made the 808 vastly known is “808s and Heartbreak” by Kanye West.


Since then, Trap music arose and became what we know nowadays. Passing from the early EDM era, with artists like Diplo, Dillon Francis, and Carnage making a huge impact on the dance scene, it evolved into many subgenres with MVPs like UZ, Hucci, Kaytranada, and countless others.

Meanwhile, the original Trap music, intended as beats with rappers on it, had a rampant growth thanks to many artists like Lil Wayne, Drake, Young Thug, Future, Migos, and many others.


It has now become the new wave of Rap music, making the cut through Pop too.

Pop stars of the caliber of Katy Perry and Ariana Grande came out with the respective “Dark Horse” and “7 Rings” hits.


All these implementations required more control over all the nuances of such sound, and some dedicated software has been released on the market to facilitate its creation.

You don’t need to look around if you don’t want to get your hands dirty with narrow GUIs, installing plug-ins, and compatibility issues.

Actually, most DAWs come with one or more synths, either additive, wavetable or FM, that are capable of creating the 808 you need.

At the end of the day, 808s are all about their envelope and the timbre that you can achieve through layering, filtering harmonically rich wavetables, or distortion units.

However, stock synths might feel boring to some, or quite habitual, keeping you from experimenting with such a simple yet interesting sound.

If you have a bunch of cool 808 samples, you can load them in a sampler and mangle them the way you want.
If you’re looking for some cool 808 samples, make sure to check our free Iconic 808s pack featuring 808s sampled from some of the greatest Trap hits ever.

You can get Iconic 808s here for free: https://beatspot.pro/collections/free-downloads/products/iconic-808s 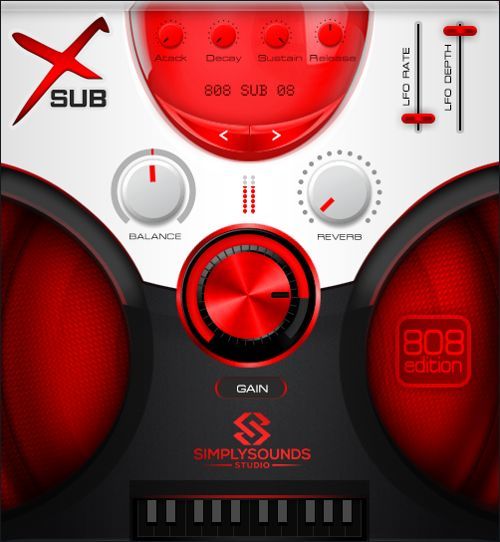 This simple plugin features 36 powerful tuned 808s, it comes with ADSR controls, and it also allows to experiment with reverb.

The power of this plug-in resides in the huge library comprising over 1000 presets, and the free version of it (X-Eight Lite) comes with 80 of them and a simplified interface.

The free version allows to control the Glide, Attack and Release, High Pass filter, and the master volume.

The coolest thing about it is that the demo doesn’t expire! 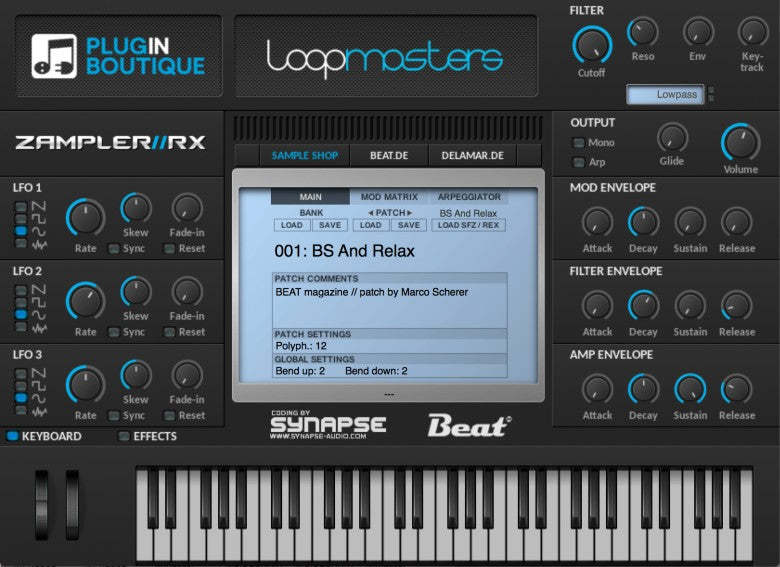 Among all the plug-ins in this list, this might have the most intimidating GUI, but that’s due to the cool feature of three oscillators. The look clearly hints that it’s a product by Synapse, the software house that created Dune.

Definitely targeted to mid-experienced producers, it’s more suited for those who want to tweak knobs rather than just browsing and fine-tuning presets. 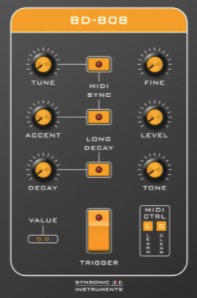 The old-school GUI pays homage to the origins of the 808. The underlying signal processing is based on a detailed analysis of the original 808 Bass Drum circuit. With the MIDI-Control it is also possible to use the plugin as a Bass Synthesizer.

This plug-in brings more options to the original 808 bass drum, which are: Tune, Fine, LongDecay, MIDISync-Tune, and MIDISync-Accent.

These plug-ins are all for sale. We can say that they’re all worth more than what they cost. If you want to commit to some expenses, this is the place to start from. 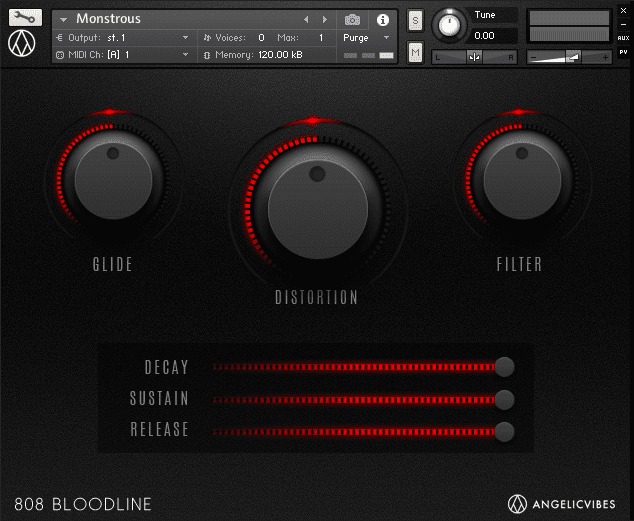 Angelic Vibes is known for releasing quality Hip Hop & Trap products. This Native Instruments Kontakt expansion is filled with 40 808s ranging from distorted and overly saturated monsters to modern style hard hitting punchy sub kicks all of which are suitable for any kind of genre including; Trap, Hip Hop, Deep House, Club, Drum & Bass, Techno and much more.

Everything is packaged with a smooth and intuitive user interface.

Also, you get all the WAV samples if you want to use them outside Kontakt. This plug-in is not among our favorites in terms of usability, but we can’t deny that it’s doing its job with shaping the music in the last 3 years, and it also comes with an extensive library of sounds, which is expanding with constant additions.

Not an 808-only thing, so it’s up to you whether you think investing in its subscription is worth more or less the cost depending on your needs and finances.

All these tools will make your life easier in one way or another. They don’t have the magic of doing the job for you, but they will definitely help you deal with crafting the 808s you want. 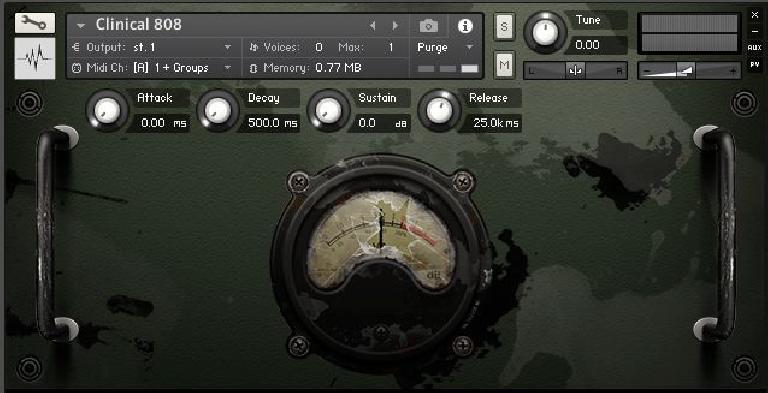 This Kontakt expansion is a staple if you like crafting your 808s this way.

It features 41 patches, and the tweaks at your disposal are the basic ADSR controls.

However, you can still open each patch and do some more nerd things on it.

If you’re looking for hard and disrespectful 808s, this should be your pick. 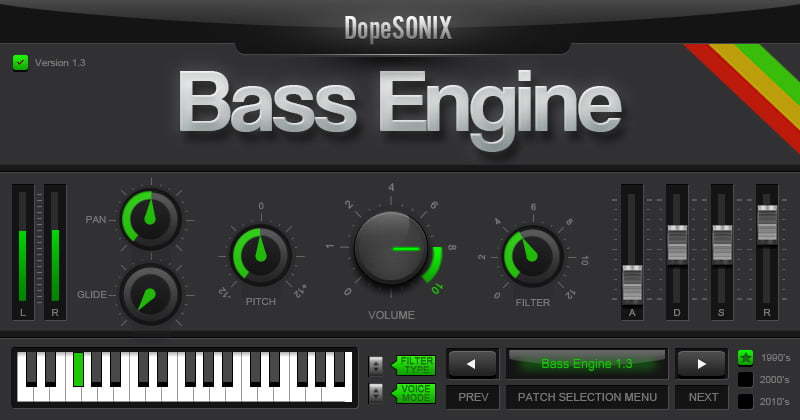 With Bass Engine 2, DopeSONIX created a bass plug-in that will fulfill all your 808, sub, and vintage bass synth requirements. You will find over 300 brand new bass instruments all lovingly EQ’ed and processed through a Drawmer 1961 Dual Vacuum Tube Equaliser for that deep low-end warmth and solid mid punch where needed.
The GUI might look a bit like the early 2010s, and the sound is respecting that era.

However, while that might feel like a downside to producers going for extreme basses like in the late 2010s, it might actually be the solution for who’s looking for that Lex Luger era that started it all. This plug-in is a staple in the EDM scene as it allows crafting perfect kicks without all the hassle of layering in your DAW.

However, 808s basically are longer kickdrums, so this plugin might be the all-in-one solution for your kick and bass crafting.

Take total control of how your MIDI input affects the length and pitch of your kick by making use of the Gate and Keytrack features. 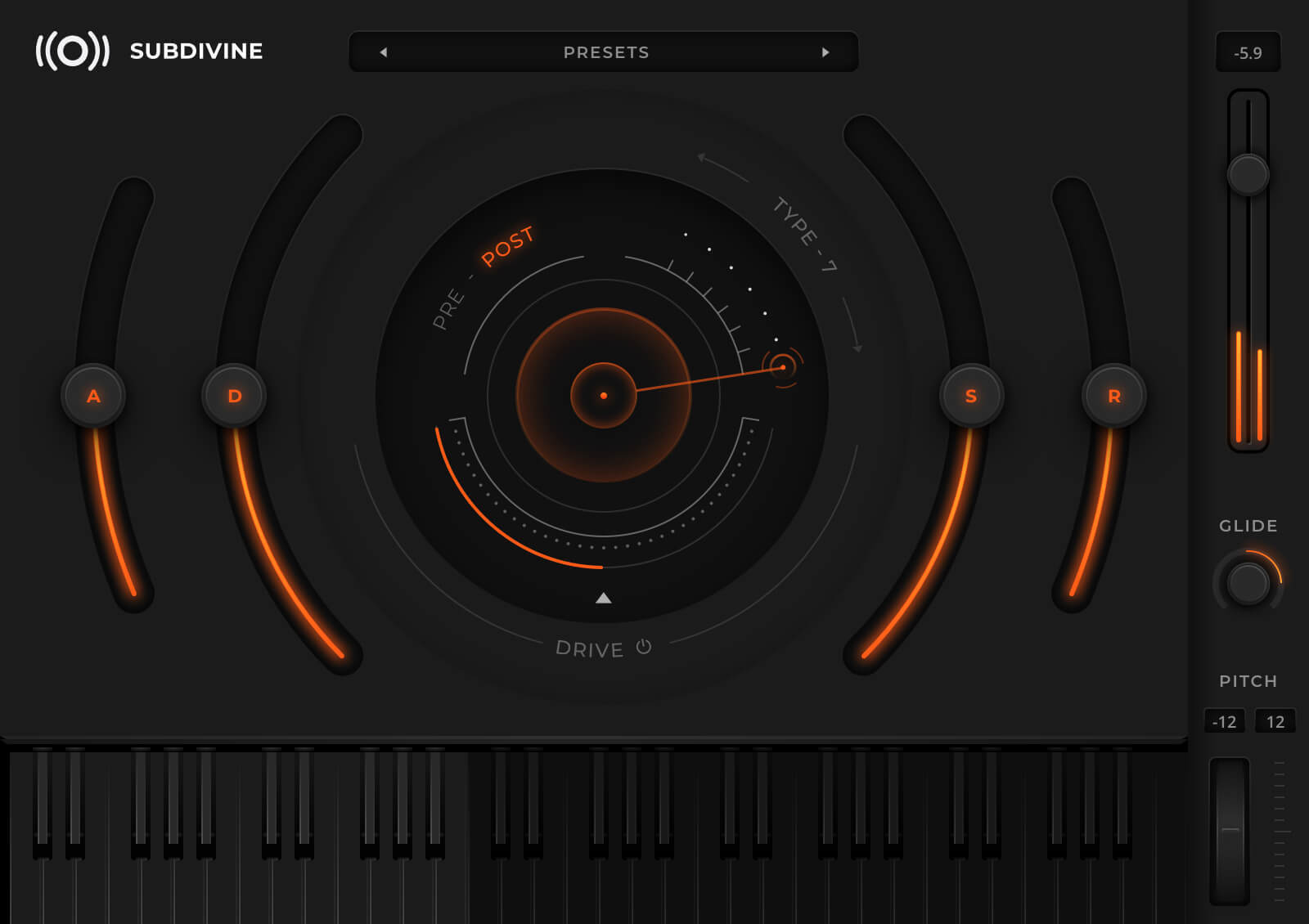 Its interface instantly recalls Arcade, but here we have a huge VST thought only for 808s.

It features 7 types of distortion, and it comes with an insane collection of analogue and digital presets.

It’s a sample-based plug-in, and that plays a role with it requiring around 10GB of space on your workstation. 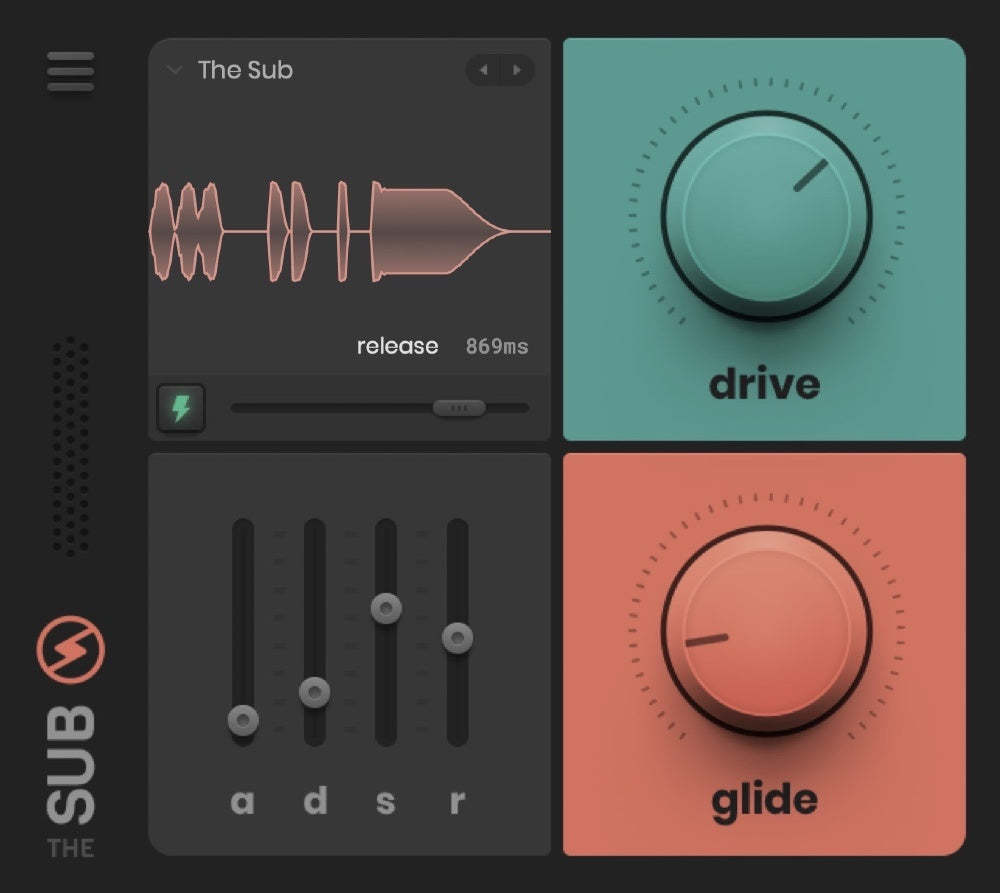 Contrarily to the other plug-ins in the Top Tier and this article in general, The Sub has the simplest GUI, but that doesn’t stop it from delivering solid 808s.

Its strength resides more in the variegated preset library. It looks like the creators wanted the users to focus on what matters the most in 808s, which is the ADSR and the amount of drive. 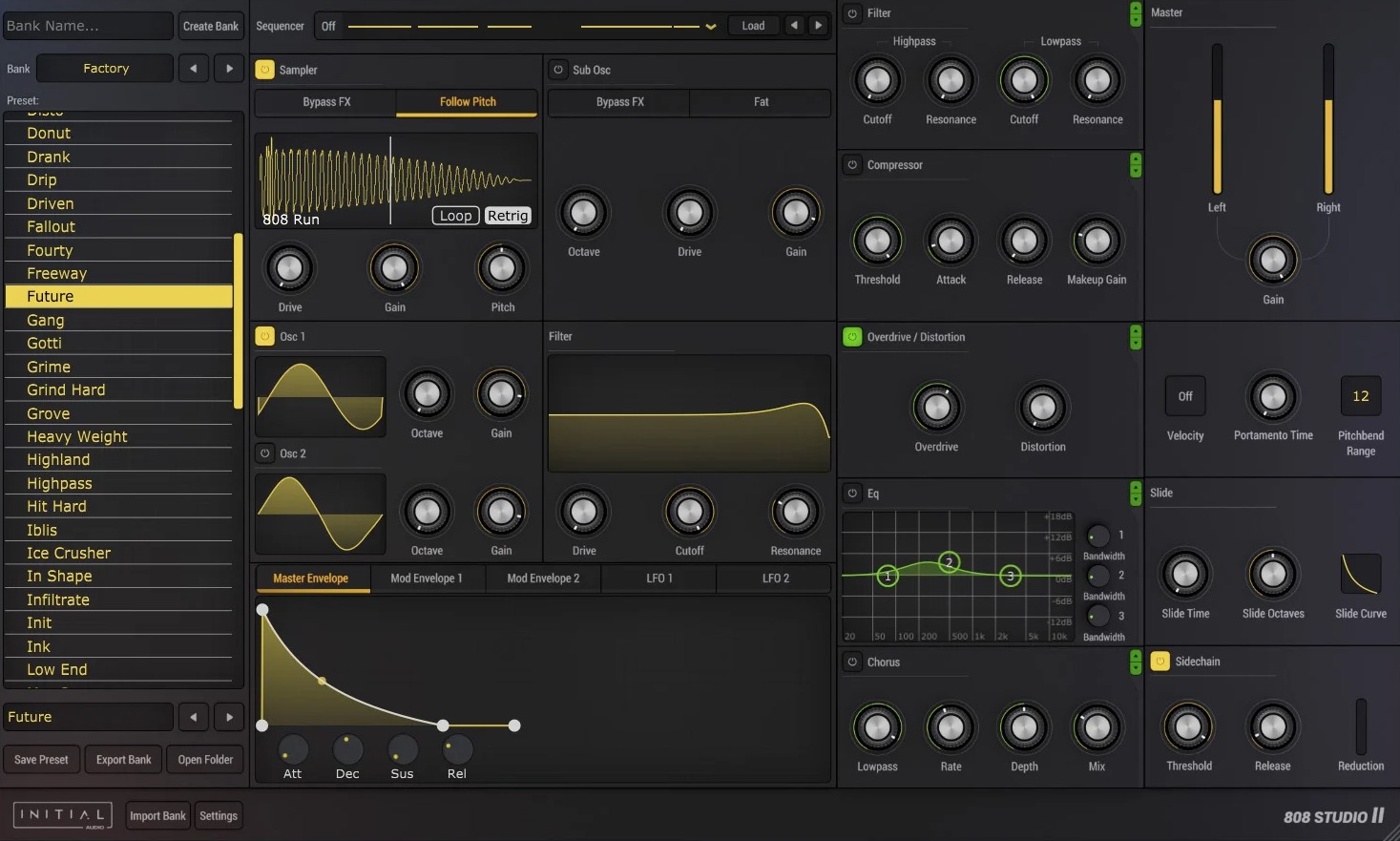 This is one of the most insightful plug-ins dedicated to 808 sound design.

It presents itself as an actual synth but stripped down to focus on 808 design only.

The library comes with 70+ presets to explore and to study the plug-in.

You also have a sequencer section that allows programming patterns with the plug-in.

Last but not least, there’s a final section with 5 rearrangeable effects to shape the sound of your 808s and ease up the mixing process, which is unique within this list! This is among the bosses of this list, with plenty of features that give total control over your 808 design, minimizing the later mixing process in a way that’s available only on actual software synths of the caliber of Serum, Falcon, and Vital.

Sublab brings the all-roundness of these staples, but it allows to focus on 808s only.

The cool thing about it is that FAW offers some additional themed expansions to quickly access the different sound styles blasting the speakers across the world.
The most notable feature is the frequency spectrum showing how each one of the three modules (Synth, Sampler, X-Sub) is contributing to the sound.

While the huge park of controls might look intimidating, its simple and visual approach makes sound design easy to understand to beginners as well.