Compressors were one of the most seeked pieces of gear of the last 30 years.

From the 90s the loudness war took over and every engineer seeked for new ways of making their track louder by decreasing the dynamic range of some elements.

Whether you hate them or love them, along with limiters, compressors shaped the sound of modern music. If at school we were teached history in order to know the future, then to become a better engineer you should definitely know these compressors in order to choose the best one for every situation.

If you’re here, you probably know already what a compressor does. In case you don't, a compressor reduces the dynamic range by reducing the volume of loud sounds (downward compression) and makes them quieter or amplifies the quieter sounds (upward compression). Both types of compression reduce the dynamic range because we get less distance between the loudest part and the quieter. Before jumping into our little history lesson, you should be aware that these compressors have a different tone, and their plus is not only the style of gain reduction, but what is so often called color. But what is this famous color? By coloring we mean the change in the EQ curve and addition of harmonics in the whole frequency spectrum, making the sound more exciting to our human ears.

Bill Putnam in 1968 invented one of the most famous audio compressors of all time: the UREI 1176 Compressor/Limiter. Putnam took advantage of the brand new FET (Field Effect Transistor) and the result was astonishing.

The major feature of the 1176 was is very fast attack time (up to .00002 seconds) and release times, plus the “all button feature”: if all ratios buttons where engaged the distortion increases and the transients passed thru and then the body gets slammed getting an “explosive” sound. This feature is available in most of the software emulations.

The 1176 is still relevant and widely used on guitar, basses and vocals. This compressor has been emulated in countless versions from UAD, Waves, Slate Digital, to Softube. You should definitely have an emulation of the 1176 in your arsenal.

The Teletronix LA-2A was invented by James F. Lawrence II in the early ‘60s. It is probably along with the 1176 the most famous and still relevant compressor on the planet. It features a tube amplifier with an electro-optical attenuation system. No attack and release selector. Just an input knob to hit it harder or softer and an output knob to compensate. The LA-2A can be smooth and silky on vocals for a natural and musical compression or if the input is driven hard it can get a nice and overdriven sizzle. Most notable use is for vocals, single drums hits and synths.

The BA-6A was a tube compressor / limiting amplifier made in the ‘50s by RCA. Originally aimed at broadcasting (AM and FM radios) this compressor was then used as a beefing tool in studios around the world. The BA-6A features a vari-mu style of compression with an insane amount of gain, with fast attack and release times. The sound of the BA-6A can be described as heavy, fat and gluey. The only software emulation available is “Elrey” by Acustica Audio, made in combo with Greg Wells. Try it on the mixbus for instant gratification.

The Tube Tech CL1B is widely considered a modern opto compressor, a spiritual sequel to the LA-2A, combining warmth and silkiness with control over attack and release settings. The CL1B is one of the most acclaimed compressor for pop and urban vocals, and even drums, making the attack seem very prominent or to smooth out entire sections. Softube made a great recreation of the original one, officially endorsed by Tube-Tech.

The FairChild was developed in the ‘50s by Rein Narma. With its 20 valves and 11 transformers the fairchild was a beast at coloring. The input knobs in the circutery come right before the valves, so the more you drive your input, the more color and saturation you will get. The Fairchild doesn’t have attack and release controls, instead you have 6 fixed combinations of time constants to choose from. It has a fast attack setting for all the 6 combinations but you can’t certainly aim to a response as fast as an 1176, in terms of release this compressor has the fastest release time to 200ms which is quite high and on the sixth position the release times goes up to 20seconds (!!!) originally made for programs and broadcasting. The overall result is a compressor full of character and with no pumping effect. The FairChild has been used on countless Beatles records, and it’s a must on the mixbus or in vocal tracks. 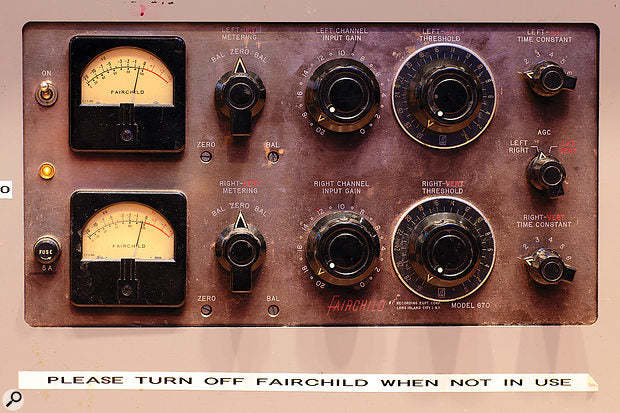 We couldn’t leave the dbx 160 out of this list. This is a compressor with its own sound. It is a VCA compressor with a hard knee, a threshold knob and a ratio knob. It has a smacking sound perfectly suitable especially for individual drum channels. It’s been extensively used on Tame Impala records, if you want to get a reference of how hard it can go.

Probably the best selling compressor of our generation, the distressor was invented by Dave Derr after falling in love with the 1176 and the LA-2A. The distressor has 8 different compression modes, with the two most distinctive ones: an opto mode for emulating the behaviour of an LA-2A and a “nuke” mode which is basically an extreme brickwall limiting, perfect for squashing like there’s no tomorrow. The Distressor features also the infamous “all button trick” of the 1176, which here is called “British mode”. The attack and release settings are fully customizable and the distressor is capable of reaching very fast combinations.

The distressor is perfect for creative slamming, breakbeats, drums, guitars and vocals.

The SSL Master compressor present in the SSL consoles is a true classic of the 90s. A research made by Billboard stated that the 83% of the records that made the #1 on the charts in 1996 was made on a SSL desk. Born as part of the mixing desk, this compressor was soon introduced as a rack mount version to enable engineers to access the SSL sound even without owning an SSL desk. The SSL master compressor is a VCA compressor that splits the signal in two parts: one going directly to the VCA stage and one acting as a detector for the compression allowing engineers to filter out frequencies from the detection and leaving the lowend uncompressed. The power of the SSL compressor its the unique character given to the transient that can be defined as “sharp” and “modern” and if used on the mixbus the glue effect is really there.